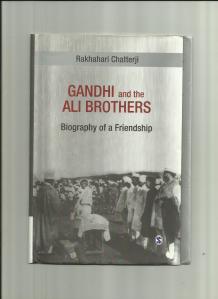 The book is an attempt to examine the start and the end of an intense relationship between Gandhi and the Ali brothers. The political rights of the minorities did not attract much attention till the middle of the 20th century. They were expected to be assimilated with the majorities. Gandhi’s movement in South Africa was the first movement for the rights of a cultural minority. After returning to India, he considered Hindu-Muslim unity to be essential for achieving swaraj. He believed that the support to the Khilafat movement, led by the Ali brothers, is fundamental for such a unity. The Khilafat movement sought restoration of the Islamic Holy Lands under the Caliph. It had pan-Islamic concerns but became a symbol for Indian Muslims for their political identity.

It was clear to the British after the mutiny of 1857 that unity amongst Indians was against the interests of the Empire. Sir Syed Ahmed Khan realized that the British could not be removed from India soon and advised the Muslims not to wage conflicts against them. His loyalty was rewarded by a largesse to establish Muslim Anglo Oriental [MAO] College at Aligarh. It later became the Aligarh Muslim University. He believed that the Muslims should restore their political identity in India and did not support the Khilafat movement. Nor did he support the Indian National Congress.

A section of the Muslims considered the British rule as a loss of self-esteem and identified themselves with the Caliphate in Turkey. Al-Afghani, who came to India in 1857 and again in 1879, was the source of anti-British pan-Islamism. Four major streams of thought took shape amongst the Indian Muslims based on pro or anti-British attitude and autonomous Muslim community or support for Hindu-Muslim unity. Reunification of the Bengal had hurt the Muslims and a deputation called on the Viceroy, Lord Minto. The Viceroy assured them that the political rights of the Muslims would be safe-guarded. Soon the Muslim League was born. It made a commitment of loyalty to the Government. The Muslims felt that separate electorates were essential for their political rights and the Congress agreed to it. This was the foundation of a permanent political disunity between the two communities. Jinnah joined the Muslim League when they passed a resolution for self-government in 1912.

The author gives a brief biographical account of the Ali brothers. Their paternal grandfather had received a jagir for helping the British in 1857 while their maternal grandfather had lost all they had for joining jihad against the British. They studied at MAO College, Aligarh. The younger brother Mohamed Ali obtained did well in the B.A. examination and proceeded to Oxford with the aim of joining the ICS. Due to a young man’s foolish fancy, the details of which remain undisclosed, he could not get into the ICS. He failed to get a teaching assignment at Aligarh and took small jobs in various government departments before settling down as the editor of a magazine, Comrade. The elder brother, Shaukat Ali followed a similar path. They joined the Muslim League, organized cheap mode of transport for Haj pilgrims and sent a medical mission to Turkey. They were interned for five years in May 1915 for suspected jihadi activities. The internment had turned them into bitter critics of the British rule and they became deeply religious. They wanted the Indian Muslims to identify themselves with fellow Muslims all over the world.

On his return from South Africa, Mahatma Gandhi was keen to understand the Muslim mind through contact with their purest and most patriotic representatives. Gandhi met Mohamed Ali in April 1915 and was impressed by his power of expression, religiosity, concern for Turkey and his capacity to reach the Muslim masses. Shortly after this, the Ali brothers were interned and Gandhi made a plea for their release. They were released in 1919. Mohamed Ali had gone to the UK to plead against the terms imposed on Turkey but failed to convince the UK Government.  On his return to India, he called for non-cooperation. The trustees of the MAO College, Aligarh rejected his plea to discontinue Government aid and closed down the College. With Gandhi’s help and backing, a new college, the Jamia Milia was started at Aligarh and later shifted to Delhi.

Hindu-Muslim unity was important to Gandhi and he thus supported the Khilafat movement. The Ali brothers toured India working in tandem with Gandhi calling for non-violent, Non-cooperation Movement for the cause of Khilafat. But, there were discordant voices among the Muslims for cooperation with the Hindus. The Ali brothers also made ambiguous statements about non-violence. The issue of a possible invasion by Afghanistan created embarrassment for Gandhi, particularly when Mohamed Ali asserted in a speech in Madras that he would assist the Afghan Army. Pundit Madan Mohan Malviya and Lajpat Rai were against any support to the Afghans. The Ali brothers then issued a signed statement to the press which amounted to an apology. The Urdu press reported with delight that the Ali brothers had obtained freedom from arrest by tendering an apology. The Khilafat document signed by Gandhi and the Ali brothers called upon the Indian Army soldiers not to fight against the Turks. The two brothers advised Muslims not to join the Indian Army. The Government responded by arresting the Ali brothers. The people started agitating and communal riots broke out in Malabar and other places after the arrest of Gandhi and the Ali brothers.

Khilafat became irrelevant when Turkey gave up the idea and the Ali brothers started losing their hold over the Muslims. In order to salvage their image, in a speech in 1924, they declared that “an adulterous Mussalman was better than Gandhi”. The Congress leaders were not amused. The non-cooperation movement had also failed. These developments and the break-out of communal rights put the alliance between Gandhi and the Ali brothers in trouble. Shaukat Ali blamed the Hindus for the riots in Kohat where they had suffered great loss of life and property. Muslim groups talked of reservations and separate electorates. Viceroy Lord Reading paid tribute to Mohammedan loyalty and promised to always protect their interests. Disturbed by communal riots, Gandhi took a one year’s holiday from politics. The Ali brothers strongly spoke for boycott of the Simon Commission but were critical of the proposal for joint electorates as suggested in the Motilal Nehru Report. They did their best to dissuade the Muslims from joining Gandhi’s call for the disobedience movement. The break was complete and Shaukat Ali even asked the Government to reward his loyalty by renewing his pension of Rs.150 per month which he had not drawn since June 1919. The Government obliged by paying it with effect from October 1933, refusing to pay for the period when he was opposing Government policies.

The author concludes that Gandhi’s idea of multicultural nationalism was too early for its time when Europe was redrawing its maps based on self-determination of ethnic nationalism. In 1927, Gandhi said “It [Hindu-Muslim unity] has passed out of human hands, and has been transferred to God’s hands alone.”

The book excellently brings out how Gandhi forged unity between the two communities by supporting the Khilafat movement and its decline when Khilafat became irrelevant.

One thought on “Gandhi and the Ali Brothers”