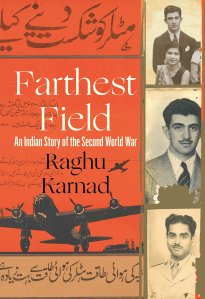 Raghu Karnad’s Farthest Field – An Indian Story of the Second World War was published in mid-2015.  So this review is a little late, but the book and its content remain eminently worthwhile subjects for discussion.  It is, in some important ways, different from many other books on the subject.

Farthest Field, essentially, follows the lives of Karnad’s grand-father, and two of his grand-father’s brothers-in-law, all three of whom served during the Second World War. One each joined the Indian Army, the Indian Air Force, and the Indian Medical Service (the organization delivering medical services to the armed forces of India which, till the late 1930s, was a separate military organization).  Almost hilariously mirroring today’s Indian middle-class obsessions for children’s careers, Karnad’s three protagonists are a doctor, an engineer and a pilot.  The book covers their individual stories, ranges widely over the historic background, wonderfully captures the feel of the times, and delivers a masterful summary of the Indian contribution to the Second World War.  END_OF_DOCUMENT_TOKEN_TO_BE_REPLACED

When staying in a hotel at Bhopal I found in the bathroom, nestling next to the shampoo and the shower gel, a third little jar marked “Ayurvedic Skin Lightening Lotion”.  As a pale skinned Welshman designed for a gloomy climate, it was the last thing I needed.  After a day of walking in the fierce sunlight of India, I was only too conscious of the problems encountered by people with Celtic skins.  I knew of course that it was not intended for me, or indeed my English wife, but for the many Indian ladies striving to become a slightly lighter, comely shade of brown.  My Indian readers will know the matrimonial advertisements – filling entire pages of Indian newspapers and magazines – where parents try to stress how fair skinned the would-be bride is.  The phrase “wheat-coloured” is particularly popular. END_OF_DOCUMENT_TOKEN_TO_BE_REPLACED

Bharat Mata may deserve a “jai” from every Indian, but do the “leaders” who govern in her name deserve the same respect? Given below are three recent examples of the sterling attitude and behaviour of our elected politicians. You can draw your own conclusions. END_OF_DOCUMENT_TOKEN_TO_BE_REPLACED