Today is March 10.  History shows many events occurred on this day, but the one we remember today is the Tibetan Uprising Day.  On March 10, 1959, the Tibetans’ revolt against China’s illegal occupation of Tibet and the atrocities suffered by them reached a crescendo.  Fearing for the life of His Holiness the Dalai Lama, his government officials advised him to leave the country.  Heeding their advice, the Dalai Lama fled Tibet and sought political asylum in India.  He was accompanied by scores of Tibetans who wanted to be with their political and religious leader.  Even today, many Tibetans put their lives in danger and find ways of crossing the border to come to India only to be with their leader in exile.

Freedom First has always supported Tibet’s struggle for independence and continues to support the Tibetan cause.  The post below is based on an interview with Mr. C. A. Kallianpur, National Co-ordinator, Friends of Tibet.  The interview was conducted in November 2015 by Mr. Eswar Anandan, poet and Friends of Tibet campaigner.  The full text of the interview can be read on their website www.friendsoftibet.org.

Tibet was not a kingdom.  It had many principalities ruled by chieftains, later ruled by the Dalai Lama institution for almost 350 years.  Je Tsongkhapa, well-known Tibetan religious philosopher started the Gelugpa sect (early 15th century) which is the foundation of the Dalai Lama institution.  Much later (late 17th century), Tibet became a Manchu Protectorate and China populated by the ethnic group Hans, too was conquered by the Manchus (inhabitants of Manchuria situated to the north-east of China).

Around the 19th century, the hold of the Manchus weakened and a revolution erupted in China.  The Manchus were overthrown and the China they built came in the hands of today’s China who then claimed Tibet and Taiwan to be parts of China.

People try to create parallels between Tibet and Kashmir issues.  But the two issues are completely different.  Kashmir was a princely state whereas Tibet was a Manchu Protectorate like Nepal and Bhutan were British Protectorates.  Today, Nepal and Bhutan have become independent countries, whereas Kashmir being a princely state was given a choice, in 1947, to join either India or Pakistan as per an Act passed in the British Parliament.

At that time, India was unaware of China’s priorities or intentions.  India was uncertain that the 1962 border conflict with China was not a war for Tibet, but perhaps an attempt by China to enter India.  However, as far as India is concerned, we should have taken a correct stand towards Tibet.  It was not necessary to go to war and, at the same time, it was not necessary for India to declare Tibet a part of China, knowing fully well Tibet’s status and the strong case it had in international law.  That’s where India erred.  It is very easy to err, but to right that wrong takes many years.  The 1962 war sealed the fate of the Tibetan issue.

No other country came forward to help Tibet.  That’s because the British had mischievously kept the status of Tibet very nebulous.  It was not clear to the other countries what the exact status of Tibet was – whether it was independent or whether it was part of China.  Moreover, the Tibetans were in a minority compared to the Chinese.  They could not, on their own, throw out the Chinese.  China could procure aid and arms from the Soviet Union.  It was an unequal battle.  Only with India’s help China could be confronted.  India knew Tibet’s status and, most importantly, it was in our interest.  It is a pity since, in the last fifty years, over 100 countries have become independent.

“Even if China reduces us to nothing but ashes, we will rise from the ashes and make a new nation.”  His Holiness the XIV Dalai Lama

The Tibetan issue has now become a mammoth issue.  China is huge – in population and technology.  Unless India improves its technology, it will be difficult to confront China.  Though India’s population of 1.2 billion people is not inferior to China’s 1.3 billion.  In that sense, we are not less than China.

However, India faces many other complicating issues, like part of Kashmir being illegally under Pakistan and a highway being built illegally through the area connecting Pakistan and China.  India has to consider all this when planning its strategy.

China is an ancient cunning civilization.  Unless and until they are provoked, they won’t get into conflicts.  The only way forward is by putting them into a difficult situation on Kashmir.  A part of Kashmir is occupied by Pakistan and if Pakistan gives India a cause for threat, say by waging a war with India, under no circumstances we should avoid recapturing Pakistan Occupied Kashmir (PoK).  In such a situation, the Chinese might create problems for India as they are involved in the Kashmir issue.  If such a situation arises, we should liberate Tibet in the same way we liberated Bangladesh.

If we look at recent history, Cambodia regime was creating problems for Vietnam in 1979.  It was clear that the Vietnamese would overthrow the regime within 24 hours, and they did.  It was also clear that China will attack Vietnam and that happened.  India should be prepared.

The World With Tibet Map

Maps are extremely helpful to get a clear idea about a country.  In 2007, Friends of Tibet produced and distributed ‘The World With Tibet’ map.  When people look at the map they exclaim that they never knew Tibet was such a big country!  In fact, Tibet is as big as Western Europe, but people have no idea because it was never shown on a world map. 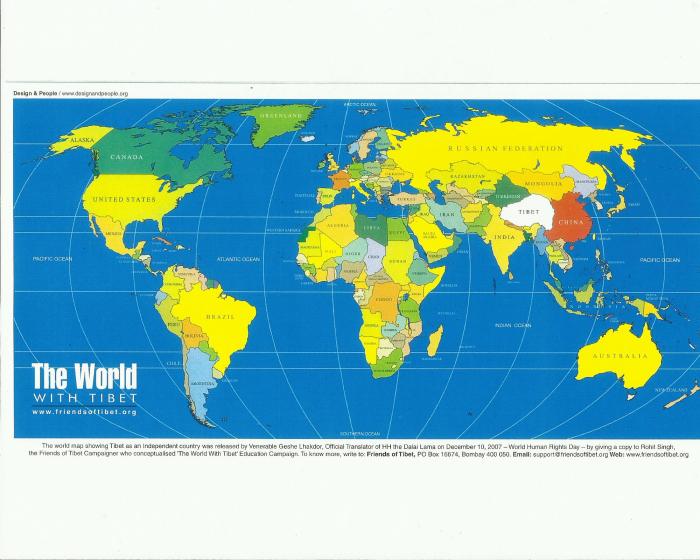 “A country is identified by its boundaries and presence on the political map.  Tibet was an independent country till China occupied it and diminished it from face of World Atlas.  This initiative is for re-establishing Tibet on the World Map, to focus on the aspect of its position, its importance and its existence which China is out to destroy.”  Rohit Singh, Campaigns Coordinator, Friends of Tibet

Friends of Tibet is a people’s movement to keep alive the issue of Tibet through direct action and it supports the continued struggle of the Tibetan people for independence.  Its activities are aimed at ending China’s occupation of Tibet and the suffering of the Tibetan people.  For more information, please visit their website www.friendsoftibet.org.

Just for readers’ information, Freedom First has published more than 50 articles on Tibet and its freedom struggle.  They can be accessed from our archives on www.freedomfirst.in.  “….. At the moment it may not be possible for us to do anything more than to extend our moral support to their courageous struggle …..” writes V. B. Karnik in his editorial in Freedom First issue of April 1959.

“I may not live to see a free Tibet, but the struggle must go on and freedom ultimately wins” – S. V. Raju’s last words spoken at a gathering of Tibetans barely five months before he passed away.  Amen!